RECOVERY FROM A DYSFUNCTIONAL FAMILY & CODEPENDENCY

Recovery is a term used in many arenas today. Many are familiar with The Twelve Steps for Alcoholism. Proliferation of self help groups have evolved for nearly every conceivable dependency. I am using the term in reference to addictions, compulsive behaviors and the condition of systems even when the dependent behavior is ameliorated.

Alcoholics who no longer imbibe, may still exhibit much of the destructive behavior even if the addiction is gone. This is what the term “dry drunk” is designed to describe. Although alcohol is the most common manifestation it is by no means the defining factor in the dysfunction. Drugs, gambling, shopping, mental illness, eating, physical violence, sexual behavior and various forms of compulsive behavior create similar atmospheres that create human emotional dysfunction and pain. Generations after the addiction, we can identify the impact upon the emotional system (family) an individual grows up in. The dysfunctional system encourages inauthenticity, to lie to yourself and others about what you are feeling. These individuals are often confused about what motivates them, and are susceptible to self-deception.

Marsha Utain and Dr. Arthur Melville1 further developed Stephen Karpman’s drama triangle2 as an illustration of the roles systems can trap people into getting stuck in. Understanding the roles our family system employs can facilitate our freedom to choose continuing it. These systems (family, work, church etc.) expect you to act out a particular role for the system’s benefit, regardless of the repercussions for you. This is why differentness, individuality is strongly attacked by the system as if it were heretical. You are made to feel guilty if you are connected to your feelings, what you want (motivates you) and what you believe or perceive. Your experience, if you are in this kind of system, is that you feel awful and your hopes never seem to materialize. This information is offered as an educational tool. Deep processing of these roles, requires professional assistance. 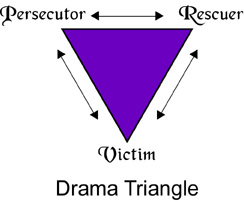 The triangle’s three sides depict a complex interplay between the roles of victim, rescuer and persecutor. Blame and guilt are the ingredients that fuel the process. This process is activated any time lies or denial occur. Blame, guilt and lies keeps the chaotic process active.

The Victim position is the key role in the Triangle because it is the position the others revolve around. These people take insufficient responsibility for their actions or feelings. They truly believe that they are life’s fall guys. Catastrophic language (everyone, you, my mother, the government) is “doing it to them”.

The poor me role can be angry or pathetic. The pathetic victim plays the pity – ploy using desolate language while the angry version is a pretender to power by using phrases such as “You are not going to do it to me again” or “You’re bad”. Either way they are looking for someone to blame for the emotions they are having and why things are not as they wish. The victim is in search of the rescuer. They hope to hook them into taking care of them. The essence is that victims manipulate others into doing what they want with blame and guilt instead of directly asking for help. The hook is the persecutor who is blamed for their plight. When the “persecutor” accepts the blame believing the victim they will feel guilty and try to remedy the situation, thus becoming the rescuer.

You give up your freedom of decision making when you respond to the blame with feeling guilty and allowing the manipulation to coerce you in to rescuing. This illustrates the effects of the manipulation and how we move from one role to another easily. If you don’t rescue you feel guilty; if you rescue you feel awful as well as you are manipulated in to doing something other than feeling your own position.

The Rescuer position, or good guy, tries to alleviate guilt (being bad) by doing something good.  As any recovering codependent can attest, the relief here is believing yourself to be unselfish (endorsed by church and family) by helping. The addictive nature of this position arises from the propensity to base your self worth upon being “unselfish” or being good, instead of valuing you. The illusion here is the selfish motive of not feeling bad or appearing to be a “bad person”. Again the individual ignores how he really feels and thinks trying to maintain this image for others, never recognizing the cost.

The rescuer must have a victim to play this role leading them into repetitive cycles of disappointing relationships. The “high” of rescuing perpetuates the selection of victims. These relationships will never be fulfilling beyond the provision of allowing you to continue rescuing…… eventually we get worn out and angry not realizing our part in the process. Needing to be needed is substituted for personhood, individuality and love. Rescuers avoid dealing with emotions and the discomfort of facing life honestly.

All addictive behavior – even rescuing – is employed to avoid feeling!

Rescuers don’t recognize they are subtly communicating to the victim that they are inept, insufficient and cannot care for themselves. The irony is that the rescuer eventually ends up the victim in that particular play. “Look at all I’ve done for  you – you owe me.”.

The Persecutor role, or the bad guy, is the villain. We rarely consciously choose this role because we don’t enjoy the characterization. It is the only position, however, from which we can truly leave the chaotic triangle. The other participants will perceive the individual who refuses to play, as the “bad guy”.

more on the drama triangle

So how do we get there from here?

We are born with the ability to experience all emotions and the potential to distinguish them. Dysfunctional systems teach us to suppress these abilities. The 4 basic emotions are joy, fear, anger, and sadness. Emotion is largely responsible for our energy for life. Dysfunctional systems label joy as good and the rest as bad. They are neither. They are just experienced differently, but they all tell us very valuable information.

If we can distinguish the actions associated with the emotion from the feeling this truth is easier to recognize. Fear of violence teaches us to avoid anger. So we amass this anger until we can hold it no more. Anger is very helpful if we can learn to act on it constructively. Fear, sadness and hurt trigger anger as a defensive response. It is vital in protecting our boundaries. Men are too often left with only anger, when they are taught that that fear and sadness are not o.k. for men to feel. Suppressing anger only leads to passivity (the opposite of definition).

Trying to hold on to one emotion denies the rest. This avoidance removes you from reality and prevents you from living in the now. The healing process allows us to feel the range of emotion as well as cope more effective with what our life presents us with. By trusting your emotions, they can be released (expressed) and you will be free to move through all of them living in the moment – in other words be alive. When we abort the full experience they remain locked within us causing ongoing pain. Storing or controlling only works temporarily. Eventually they will have their day. So complete them.

In between being stuffed or numb and experiencing your feelings is “running”. This is a form of controlling, where you make limited contact with the emotion, but you don’t assume responsibility for them. There is a tendency to translate / run the feelings into your family’s accepted emotion (e.g. fear). The result is you will really be out of touch with your emotions even though you feel something this one acceptable feeling. Every feeling is translated into that experience. This is used to manipulate others in to the triangle; blame them. Making your feelings right is a means of controlling them – not feeling them. The addiction here is controlling other’s behavior to avoid feeling.

Dysfunctional systems offer poor models for us to learn this, so we must do it as an adult. The fact the emotions are controlled doesn’t mean they aren’t happening. Suppressing emotions are largely the cause of panic attacks, anxiety compulsions, depression and addictive behavior. Learning about your emotions must be coupled with experiencing them. Our emotions must be experienced, not intellectualized. Obstacles to experiencing our feelings can come from mislabeling, having more than one emotion, not processing the situations or tapes that evoked the feelings.